The country faces a review on its financial services sector by the Global Forum.

Following the announcement of President Juan Carlos Varela on the commitment of Panama to exchange financial information, the director of the Center for Fiscal Policy and Administration of the Organization for Economic Cooperation and Development (OECD) Pascal Saint-Amans acknowledged that the pledge is a step forward for Panama but said the country still has a long way to go.
Saint-Amans spoke with La Prensa during the annual meetings of the International Monetary Fund and World Bank, which concluded yesterday in Lima, Peru. The following are questions and answers from the interview.
What do you think of Varela's pledge?
It is a good step forward. In October of last year, 94 countries committed themselves to the automatic exchange of information. They pledged to implement the standard. Panama was one of the few jurisdictions that did not make the pledge, along with Bahrain, the Marshall Islands, Vanuatu and Nauru, with Panama being the only significant financial center.
Panama said it would exchange information, but that it would not accede to a multilateral convention. what is your opinion of that?
From a legal point of view, once a commitment is made, it has to be implemented. To share information, it can be done through a multilateral convention, or it can be done bilaterally. In that case, one should move fast if you want to grant the exchange of information to all interested countries that meet the standard of confidentiality.
Do you think that Panama will pass to the second phase of the review of its jurisdiction?
The peer review, which includes 30 countries, has made that recommendation to the Global Forum, which has until the end of October to decide. I think it was premature of Panama to announce that, as it broke the rules of confidentiality. It is more than likely, but who knows. There are members of the Global Forum who are not in the peer review group. We have to wait for the Global Forum, which is the sole decision-making body in this matter. In substance, it is true that the members of the review group have recognized some progress that was made in Panama.

Varela said that debate on the exchange of information should be conducted in the UN. Do you agree?
It is an opinion I respect completely. But in this case, there are 127 jurisdictions, including Panama, that are members of the Global Forum. What matters is that all countries are equal. No longer is the OECD a group of countries dictating what rules other countries have to make.
In Panama there is a concern because the steps demanded by the OECD could hurt the competitiveness of the financial services industry. Do you agree?
It is not true. Because all countries have moved. What happens is actually the opposite. Panama won a competitive advantage by not conforming. That is why other countries think that the situation is very unfair because Panama is receiving money that they have lost. The perception in Panama is really different from the perception outside.
Do you think that those flows of money look to hide the funds from tax authorities?
The reviewer group will decide that. But that's basically what we heard from the banking industry.
In the country there is a sense that a double standard is used. That the United States is not required to provide information with the same level of transparency that it demands from Panama. Is that a fair statement?
The rules are the same the United States is expected to act with reciprocity with any other country. Look at the review of the United States. It has a mark in regards to beneficiaries and they have to change. Currently they are providing required information, but not enough

The reorganization committee of Banco Universal started last week the process of sending letters to all general license banks to participate in the sale process of the company. Banco Universal was intervened by the regulators back in June 2015 and is one of the smallest banks of the Panamanian banking system.

The process of receiving proposals will be open for 20 days, said Gustavo Villa, secretary general of the Superintendency of Banks of Panama (SBP).  Those interested in acquiring the operations of Banco Universal  will have 20 days, starting August 10, to submit their bids.

Interested parties will have available a virtual data room with general information about the bank after signing a confidentiality agreement. They should express a non-binding offer at that time, and if they are interested or not to continue in the process.  The entire sale process is expected to last between 90 and 120 days.

Panama: Profits for two men and a dog

Global Finance magazine has an interview with a technocrat featured as "the new guard" Pascal Saint-Amans (@PSaintAmans), an OECD veteran named director of its Centre for Tax Policy and Administration in February 2012, who is overseeing the guidelines review.

It is very revealing that Saint-Amans told Global Finance in an interview: “Profits cannot be located in a place where you have two men and a dog,” which basically means that Panama will never cease to be in black or grey lists (or that Panama has 3 million people and 1.5 million dogs).

On 17 June 2015, the Commission adopted an Action Plan

for fair and efficient corporate taxation in the EU.
The Action Plan sets to reform the corporate tax framework in the EU, in order to tackle tax abuse, ensure sustainable revenues and support a better business environment in the Single Market.
See the timeline

5 Key Areas for Action have been identified:

1. Re-launching the Common Consolidated Corporate Tax Base (CCCTB)
2. Ensuring fair taxation where profits are generated
3. Creating a better business environment
4. Increasing transparency
5. Improving EU coordination
A map of non-cooperative tax jurisdictions has also been published, in a move to reinforce the EU's response to external threats to Member States' tax bases.
The Commission also adopted a decision to prolong the Platform on Tax Good Governance, and revise its scope and working methods.
For further information 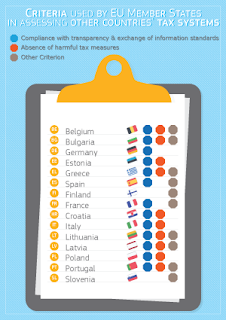 The map was drawn up on the basis of work done by the Platform for Tax Good Governance and the information provided by EU Member States.