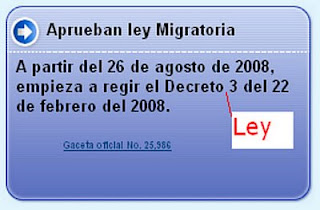 In case you are still thinking about which visa to apply for, the Panama Immigration Spanish version has a handy reminder that "Effective August 26, 2008, [Law] Decree 6 of February 22, 2008, will be in force". The English version has not been updated since early 2007.

This means that in 30 days minimum investment and solvency requirements are likely to have been doubled and several visa categories (including the Rentista second passport) will have been eliminated.
* They forgot to word "Law"

Levin - Obama Bill seeks to end confidentiality of US corporations

Panama attorneys are required by Panama "know-your-customer" laws to keep confidential files on who are the beneficiaries of the corporations, private foundations and trusts for which they provide resident agent services. However, the information can only be released to Panama prosecutors when a criminal investigation is conducted by the authorities or when assisting foreign authorities in non-civil cases.

When said KYC laws were enacted back in 1994, Panama attorneys warned the authorities that the bad guys would only head for Delaware, Nevada and Wyoming, where incorporators sell corporations online in 24 hours to anybody with a number from a stolen credit card and a mail drop to receive the corporate papers. In the end it was good for the Panama incorporation business because it served to weed out bad clients and improve the financial center.

13 years later, Senator Levin proved right this prediction by sentencing that "criminals are hiding behind U.S. corporations while committing all sorts of crimes -- from terrorism to money laundering, fraud and tax evasion."

Senators Obama, Levin and others have sponsored the "Incorporation Transparency and Law Enforcement Assistance Act" which is not making Resident Agents in the US very happy. The bill would be the equivalent of submitting shareholder records of privately-held corporations to the Public Registry.

A spokesman for Nevada registered agents, who make their living filing incorporation papers for businesses, says a bill that would require states to keep corporate ownership records is the worst legislation imaginable.

The bill would require secretaries of state to maintain records of the identities of owners of private corporations and limited liability companies. Although states could keep the owners' names confidential from the public, state officials would be required to provide the records in response to a law enforcement agency's subpoena or summons.

"Criminals are hiding behind U.S. corporations while committing all sorts of crimes -- from terrorism to money laundering, fraud and tax evasion," Levin said. "The bill we are introducing today will strike a blow against corporate secrecy, strengthen law enforcement, and curb the misuse of U.S. corporations."

Levin is chairman of the Senate Permanent Subcommittee for Investigations, which in November 2006 challenged officials of Nevada and Delaware about laws that allow corporate owners to hide their identities.

Critics of the bill call the measure unnecessary government intrusion into the investments of businesspeople who are legitimate.

"This is a huge impediment to new business," Derek Rowley, president of the Nevada Registered Agent Association, said in an e-mail. "In our current economic times, I can't imagine a worse idea."

"It surprises me that Senator Levin is introducing this bill at this time, given the fact that the National Association of Secretaries of State has adopted a series of recommendations that we feel offer a very reasonable solution if they were instituted consistently in all the states," Rowley said in an e-mail. "Senator Levin is introducing this bill as though the states have been completely unresponsive, and that simply isn't the case."

The registered agent association worked with the Nevada secretary of state's office to help lawmakers adopt legislation for dealing with the same issue, he said.

The new Nevada law provides that law enforcement can request ownership records from corporations and LLCs. If the company fails to respond, the secretary of state can dissolve the corporation.

"(The Levin bill) mandates the disclosure of 'beneficial ownership' of all corporations and LLCs in the U.S.," he said, "a feat that is technically impossible."